Our first night passage and 2 full days on the water

Our first night passage and 2 full days on…

In the morning we waved good bye to Adventurous and Lostura who left 1 day sooner than us. Because Freddie was by himself now he didn’t want to do the overnight passage. Paul from Imagine and Tim had decided the next day was a better day for us to leave, so we stayed another day to wait for calmer weather. We had a quiet day on the boat. I made some ghee (clarified butter), baked some banana bread, we pickled the Olives we collected the day before, I made some guacamole and we had another short walk and play at the beach.

In the afternoon we had a catchup with Paul and Lori from Imagine for coffee and banana cake and to go over our night passage, as they have lots of sailing experience. By then the news reached us that both Adventurous and Lostura got beaten by the wind which came up to 40 knots and had a rather unpleasant experience, loosing equipment and getting soaked. So we where sure glad that we where sitting safely in our Bay still sipping coffee and nibbling cake.

I still get super anxious about anything other than short day trips, as its out of my comfort zone. But I agreed it was better to get some experience under our belt. So I asked Paul and Lori lots of questions and I felt a bit better after that. We prepped the boat for passage, storing everything away outside and inside that could be lost or get loose and went to bed early.

We got up 6 am in the morning to have some brekki and get ready to leave by 7 am. The kids where both still snoozing. Tim took Lucy for her last walk and popped the dingy and motor safely up on deck, just to realise that we still had the sternline out. Luckily Paul rescued us and let his and our lines off and we lifted anchor to start our 2 day / 1 night passage.

I always try to take the helm to start with, so I don’t get seasick and also to give Tim a break, just in case there is rougher weather around the corner where he has to take over. It was a really nice sail and we even got up to 9.3 knots speed, which is the fasted we ever went with a really nice sea state and pleasant wind. The rest of the day was a mix between slow and being becalmed and a bit of motoring. Because Greece has gone into lockdown again and still has its borders to Turkey closed we had to go zig zagging around avoiding boarders.

We had a pretty sunset on the water, but at the same time I got really nervous. I was at the helm and loosing visibility slowly to the approaching night. Its so weird, I have always had visuals sailings and never had to rely on instruments solely. Tim reassured me and we did transition fine into the night time. Before it got dark Tim got our safety lines out, so we could be safely attached to the boat. Tim had drawn out a rough plan for shifts for the whole passage, but so far we had just played it by air with him and me taking turns when it felt right and the kids taking the helm a couple of times.

Tim decided he was going to do the first night shift and I went to have a lie down below. I heard the kids join him for a bit upstairs and I didn’t really get all that much sleep having one ear on what was going on outside. I woke up at midnight and checked in with Tim. There wasn’t much wind at all and the sail was flapping to and fro. I got dressed and ready to take my watch, rather nervous and bewildered how I could be in charge of such a big boat all by myself. I was sure glad there was almost no wind. Imagine was still nearby and just floating along too. Tim went downstairs and I tried to tack the sail a few times in the weird tiny breeze, which couldn’t decide where to blow. After an hour I did another tack and the boat started to go in a circle. We where right on the Greek boarder and I started to worry and called Tim for help. We decided to take the sail in entirely as there was pretty much no wind to speak of and just float for a bit and wait for a breeze. We had a half moon and I could see the silhouettes and lights on the land nearby. I was super alert, so worried I would miss anything. I listened to my audiobook, and checked looking around every 5-10 minutes, keeping an eye on the instruments. It was peaceful and calm and really nothing to do with no sails out. At around 4 am I felt a breeze around my ears, I waited for 5 minutes to see if it would stay or just tease me. It stayed, so I decided to get the sail out and see if we can get some mileage in, rather than just float in a circle.

Tim must have heard the action and he came up asking what’s up. I was so proud to have handled the sails by myself and was half disappointed, half glad to see him so soon. The wind was still very, very slow and Tim realised that our batteries where almost totally drained from having all the instruments going. So we decided to motor sail for bit to charge the batteries. Tim said he was awake now and could take over again, so I went down and had another snooze until sunrise. We saw the sun coming up behind a mountain, a big red beautiful ball. It always amazes me how quick the sun and moon rise.

I made Tim some coffee and Luca cooked some porridge and we all soaked the morning in. We where still under motor, so I had a tidy up of all dishes, blankets and tethers to get ready for a new day of sailing. Eventually the wind picked up and we put our sails out. We where fast approaching the part of the journey I was dreading. The coast between Turkey and Greece around from Knidos is known to be one of the roughest bits of sea here. On the way from Greece we had unpleasant sea, but luckily sailed in the right direction, rather than beating into the wind. When we approached the point the winds got stronger and Tim could see a deep blue line on the water and whitecaps indicating even stronger winds. So we reefed the sails.

We got the spray dodger up and tidied the cockpit, put everything loose downstairs and hunkered down. We got a bit of spray and the sea wasn’t pleasant but not terrible either. After an hour or so (you quickly loose a sense of time doing longer passages) the wind calmed down and in the end approaching Bodrum we decided to motor. It was already 3 pm by then and Lucy hadn’t gone to the toilet.

We usually get her to shore 2-3 times per day and she has been taught not to do her toilet business in the house or boat for years and on the very odd occasion where she had an accident been usually told off about it. So I was worried how she would cope. When we take her to shore, she totally knows her keywords and what she has to do – its very efficient, so we hoped that on the boat, when we say her keywords she would get the gist. But no. She just would not go. We tried the front of the boat, the back of the boat. I even took her into the shower, because that can flush out straight into the sea. I modeled for her on the toilet what to do even to no avail. She just looked at me, like I had gone completely mad. All the while walking to the back of the boat, looking for the dinghy – her lifeline for shore toilet expeditions. She held on for the whole 34 hours! She did so well, snuggling up for the whole passage, every now and then poking her nose up in the air to take a sniff of whatever caught her attention.

Once we where out of the rough weather I took the helm for the rest of the journey and Tim had a nap. We motored for a few hours, so that is easy enough, just following the instruments and visuals. While I was there at the helm all by myself I had time to reflect on the trip and felt glad we did it, even though I was scared as usual. And I couldn’t help being proud of Tim for guiding us all through the experience, thankful to Paul and Lori for helping us getting our heads around safe passage making and being reassuring in weather choices. And then I was also a bit proud of myself, for handling the boat by myself with anybody else looking over my shoulder or guiding me. I can see that although sailing doesn’t really come naturally to me, that I have learned a lot over the past few months and gained quite a bit of confidence. Its slow learning for me and small steps, but since we have time and don’t have to rush anything much it feels like a natural progression.

I am really proud of the kids too. Neither of them where worried or scared and really got the gist of everything that was expected of them. Even beyond both helped with meals and getting things done and just being patient and accommodating.

We arrived 7 pm on Saturday, left 7 am on Friday, did 120 nm and had a fruit salad of weather as Tim described it. We anchored in the beautiful harbor in Bodrum next to the castle. I started a big tidy up, while Tim and Luca prepped the dinghy to take Lucy to shore. Needless to say, she had the longest pee and surely must have felt so much better. We had some dinner, an early lie down and the deepest, longest sleep. 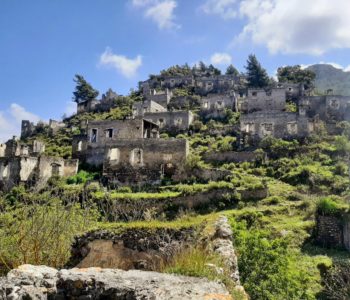 A special and touching trip…