Lithia and Kos, the last 2 stops before crossing over to Turkey

Lithia and Kos, the last 2 stops before crossing…

We got up at 7 am to leave for Levitha. Levitha was really just a stop for us to make the passage to Kos shorter and have a save anchorage. Its was 32 nm and ended up being a 7 hour trip.

It was the second yucky passage on our way to Athens. Luca and I got sick again. Luckily Luca is only sick one time and then done for the day, whereabouts if my tummy gets set off I pretty much keep going until we stop, which is rather unpleasant and makes me an entirely useless crew member.

In the beginning of the journey we again had big waves and had to sail into wind. It felt really rocky and rolly and was not within my comfort zone. It calmed down a bit later and we arrived safely to catch our first mooring ball.

Once we arrive at a new place after a sail its always tidy up time first as everything seems to turn into a mess with dishes from the day, ropes, life jackets etc. Tim usually dinghies Lucy to land, so she can do her business. She holds on pretty well during our day trips so far.

Once we where all sorted we went for a walk to the farmhouse. The island is only inhabited by a farming family, who have been there for generations if I understood that right. We saw some big plots of land surrounded by those beautiful stone walls. The stone walls had a special feature here that we hadn’t seen before. On top where prickly and old tree prunings that had big rocks on top of them to hold them down. Apparently it prevents the goats jumping over, so they don’t eat their crops. We inquired about having a meal at their little “taverna” and where told that they come every night down to the boats to check who wishes to have a meal and check the mooring lines. The mooring is 7 Euros or free if you have a meal.

We decided to go for a lunch the next day. We just couldn’t pass the opportunity to have an organic, home grown and cooked meal there. We also bought some eggs of them – they have a bout 100 hens. One of the sons told us that they grow most things themselves. They only rarely go to another island to stock up on some things or friends bring some things by boat. Its such a long way away from everything, we couldn’t imagine living like that. But I admire people who do. I imagine there would be many challenges.

We had a nice sleep knowing that we are save on our mooring ball.The next morning I took Lucy on the paddle board to do her business on land. Halfway to land I realised I should have my beach shoes on and that Lucy didn’t have her collar on, but I couldn’t be bothered to go back. In Greece many of the rocky beaches are scattered with colonies of prickly black sea urchins. I had read that if you step on them the prickles break off and stay in you foot and can cause secondary infection, so I have always been reminding the kids and Tim to be mindful of them. While I was holding the paddle board for Lucy to get on, my pain receptors kicked in and I realised I stepped on a tiny sea urchin that had lodged some of its prickles in my foot. I tried to pull them out, but no chances. So being cross with myself I paddled back and then limbed for a couple of days while getting random stings from the prickles if I wasn’t mindful to not put my weight on my foot. Funnily enough after a couple of days it stopped hurting and I am not sure what happened to the prickles – they either lodged themselves a bit deeper more comfortably or my body is dealing to them internally.

After challenging passages or days I always get domestic, so I baked a yummy apple cake and put some pizza dough on. At lunchtime we went up to the farmhouse and oh my was that a delicious meal. We asked them to bring us a shared lunch, so we could all try a few things. We got some home made tzatziki, freshly baked bread with sesame seed, some baked aubergine and zucchini, some spinach with lemon, some grilled panir type cheese and some slow cooked lamb with potato chips. Everything was absolutely delicious, simple but super yummy food.

The taverna is not really a taverna as such. Its about 5 tables on their farmhouse porch and the porch is surrounded by the farm buildings and a beautiful Greek stone wall with big flowerpots and all sorts of sea shells, turtle shells, and old relics of pots and pottery that they found in the sea. We went back home contentedly and with full bellies, happy to have had this experience.

In the afternoon more boats arrived and Tim helped one yacht with a couple where the lady was struggling to handle the mooring ball because it was so breezy. Luca and him jumped in the dinghy and helped to thread the rope through the mooring ball. The couple came over later and gifted us a yummy bottle of red wine. We rested and made some easy pizza at night getting prepared for the next leg tomorrow to the island of Kos.

Kos was another 42 nm miles away and it took us 8.5 hours to get there. We parked in the old harbor right in town next to an old castle. The passage was really easy and uneventful (yay). There was little to no wind, so we had to motor parts of the journey.  It was free to tie up in the old harbor, but super noisy at night. All the night clubs would go on all though the night right up until 5 am in the morning.  We had a walk after dinner and had some ice creams and settled in the for the night. Its amazing how tiring a whole day of sailing can be.

Coming to Kos was a rush and its a bit sad to not be able to see much of the island. Our feelings where mixed, as Tim was already overstaying for more than 2 months and in Athens we had been threatened with fines of 1,200 Euros for 2 months overstaying. We just wanted to get out of Greece to ge able to forget about all the visa troubles and have a breather. We had heard from other cruisers, that they got away without the fines, but had big discussions, shouting and all sorts of trouble. So we prepared ourselves for a few hours of the usual un-helpfulness and shouting with the officials to be able to check out.

Much to our surprise we were done in less than one hour. Luckily with the guidance of the other cruisers gone before us, we knew that is probably best just to hand our papers and hold tight with any talking. The Immigration guy just asked Tim to fill in a form stamped our passports and sent us on our way. We couldn’t believe it. No questions asked, no inquiring, no mention that Tim was overstaying… Same at customs and the port police. We were SOOOO relieved.

We went for another walk through Kos and decided to have an ice coffee / smoothie to celebrate, having just saved 1,200 Euros.  We had a look at the ruins from an old castle and at the tree of Hippocrates, under which he is said to have taught his students.  That evening we went to have our last Greek gyros and prepared mentally to leave Greece the next day and enter our first new country. 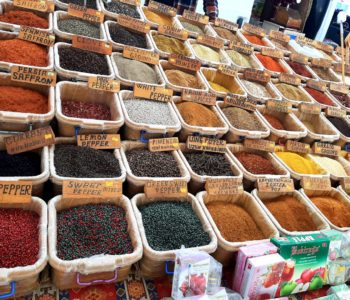